Working in partnership with Social Enterprise UK and Social Enterprise Scotland, CEiS Events managed the inaugural Social Enterprise Exchange on March 27th at the SECC which hosted over 1200 delegates, exhibitors, speakers and sponsors that came together to trade, learn, debate and celebrate social enterprise in the UK and around the world. 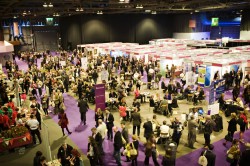 With a representation of 22 countries the event was the biggest social enterprise event in the world in 2012 and was a success for new partnerships, business exchange, networking and being inspired. For CEiS Events, the most successful outcome was that out of 28 suppliers, 25 of these were social enterprises. This achievement is what the team strives for in all events they manage and what sets them apart from other event management services. Some key event highlights are illustrated below:

• Delegate targets were exceeded, despite concerns that recession would have an adverse effect

• Sponsorship was difficult due to economic circumstances, yet the event covered its costs and generated a modest surplus for the event partners to assist their sustainability

• The policy engagement with contributions from Alex Salmond, First Minister, Chuka Umunna and Labour Party, Derek Mackay MSP, highlighted to local, national and international participants how mature and embedded social enterprise is within Scottish and UK economic and social policy

• Significantly, record levels of business to business trading were reported thereby vindicating the organisers’ decision to prioritise exhibitors by capping the capacity of plenary and break out space to 50% of total attendance

• The international dimension added depth to the event, from the business to business contacts established to the local economic benefits of post Exchange study visits, the opportunity to engage with international colleagues who are now raising international awareness of social enterprise in Scotland and the UK, and its potential worldwide

• Finally, a social enterprise trade fair where the catering is widely praised instead of being slated. The strategy of working with the SECC preferred supplier, Levys, to allow lunch catering by 5 social enterprises was an outstanding success as it highlighted not just the quality of product and service, but together with the other social enterprise suppliers, emphasised a movement that is supporting its own development and is capable of much if the environment is favourable.