Craft Cafe has been open since September 2008 and continues to flourish and grow. The cafe was created to help alleviate social isolation amongst older tenants in the local population.

Castlemilk is a peripheral housing estate in Glasgow and is an area of multiple deprivation where approximately 17% of the population are over pension age and of those 60% are completely reliant on means tested social security benefits.

It was recognised that there was a lack of activities for older people in the Castlemilk area that were accessible both in terms of location and the costs of attending and so it was decided to make the craft cafe project free to users but to encourage amongst participants a social enterprise culture where they were encouraged to sell some of their work both to raise funds for the project but also so that the participants recognised that their creations were desired and valued by other people.

The project has been funded by Cassiltoun Housing Association and the Scottish Government through the Wider Role fund. The project was created and delivered by Impact Arts. 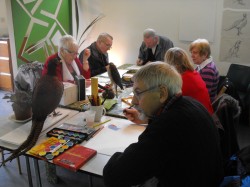 Key to the success of the project are the strong links with local health providers and working with other local agencies such as Carr Gomm and Ardencraig Care home who bring residents down to the class. Also important has been the link with the local Pensioners Action Centre who come and pick up some of the Craft Cafe participants and take them to the Centre for lunch.

J is exceptionally grateful the class exists; she has previously said “I actually love it, it’s changed my life”. Recently she has been battling with depression, but says regular attendance at the Craft Cafe and knowing that she has a network of people who care about her and ask after her if she isn’t in helps greatly, and it motivates her to come back into the class even when she is not feeling great.

This month she also told one of the other regular members of CC that talking to her at the class really cheers her up as she’s been through so much in her life yet still approaches everything with such positive energy. J thinks this new friend, who she met only through attending the Craft Cafe, is an inspiration and that being around her and all the new people she has met at the class make “life worth living”.

Since attending the class, L who has numerous illnesses, including manic depression, has been in an unhappy living situation and has been trying to move to a new flat.

Through her distress, the other members of the Craft Cafe have kindly supported her, listening to her situation and offering advice where possible. In July, after almost 2 years, she finally received word that her application to relocate had been successful.

The other members were delighted for her! A few of them helped her move furniture into it and others clubbed together to buy her a little flat-warming gift which she was touched by.

After moving into her new place L is like a different person in the class, much happier and in turn, everyone has noticed this and are also a lot more relaxed around her. Even though she has moved slightly further away from the class, she still attends regularly, mostly 3 times a week and says she enjoys coming a long and that “it’s good to get out of the house and paint” and “would be really lonely without it”.

H has attended the Craft Cafe since it first began and still comes along to paint and socialise. His paintings have been admired by many and he has sold and been commissioned to paint various pieces.

For one recent craft fair, art postcards were produced to display the work of some of the Craft Cafe members in a more accessible way for people. On receiving a postcard with his work on it, H quietly said thank you and didn’t make much of a fuss about it. The next day his daughter called to ask if there was a website of some sort for her to see her dad’s paintings or if she could visit the class.

This was prompted by the fact her dad, who is very humble and does not talk about his painting ability to his family, had actually put his postcard through her letterbox. She was delighted and surprised to see his name on the back and obviously he was, however quiet, proud to be able to show her his work in such a way.